an alphapictonumeric text
by péter farkas

translated by timea balogh
(and éva zsizsmann until “the pieces of the exhibition”)
the translation was checked and proofread by fabian farkas, alastair maclennan and brian patterson 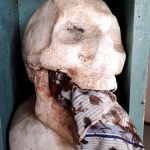 It was exactly sixteen years later, at the flea market in Klettenberg, that he first thought about writing Josef’s story. Another twelve years passed, and still all he knew was that Josef’s story was that of an exhibition. Over the previous twenty-eight years, he had written more than 15,448 words of fragmented notes. It is an astonishing feat if we consider his remarks written shortly before this text: „I don’t remember when I became mute. Was it when Cain slayed Abel? Certainly long before, probably before I started speaking, trapped in one of the cataclysmic wells of being for the past ten, hundred or a thousand years. I’ve only been able to stutter or remain silent since. It is the scripted or oral variant of this silence that I consider literature, how I try to write or pull myself through the stages of speechlessness or aphasia, dragging my numb limbs, like a cripple who’s fallen out of his wheelchair. Of course, there are other kinds of literature too, but I’m not good at other kinds; as I am not capable of entertaining and I have never wanted to teach. I am not showing off as a tragic character—there is no tragedy here. Tragedy means that even when things can go another way, they end in catastrophe. Tragedy is for entertaining ourselves and others anyway, and, as I have mentioned, I am not an entertainer. What I do have, however, what everyone is fated to have, is drama. Literature that has its origins in stuttering or speechlessness is dramatic in nature, and the fate behind it is also dramatic. I had intimations about this by the end of the eighties already, but—as I see it now—the intimations had not yet consolidated into knowledge, and so I could not recognize or accept my capabilities and limitations. Or, put self-ironically, I was in the pre-romantic stage of my life. That was when Josef appeared as part of my day to day. It was a restless, dangerous period, hysterical and self-destructive…“ It was indeed a dramatic period. Writing became impossible for him again, and his every day turned into a struggle of life and death in the most existential sense. He fled to the downstairs apartment and hid among the frozen walls in his poison-green ski suit, for days. „I could neither live nor kill myself,“ he read. But he went on living, while slaying himself every hour. Others unconsciously but undeniably sustained his existence, as they did not know about his many deaths. That’s when Josef visited him for the first time. He himself was not otherwise a particularly interesting figure. The core of him was incredibly boring, as he considered everything with tired disinterest; he usually directed his inner life toward pointless and aimless hysteria. As for his outward appearance, he certainly had some strange features: his green ski suit, for instance, which people often pictured when he came to mind, and which qualified him as an interesting figure. Josef was totally loaded— „chemically speaking,“ as he later put it. He hardly spoke any German. They understood each other, either despite, or because of that. They sat around in the freezing cold apartment for a while, and then he asked Josef what he’s doing. „There are three of us,“ Josef said with a kind smile. „Mary, Yorick, and me,“ he added. „And you perform together?“ he asked. „No“, Josef said, „we don’t perform“. Sixteen years later (September 18th, 2005, at 9:35 am—he’d never been so exact in his notes before), at the Klettenberg flea market, he leaned against the lid of a trash can and wrote about the conversation in a more sober state, declaring that this was the first time he thought about writing Josef’s story. This statement, as it stands, is not actually true, but we won’t get into the details of this now.

For once, there was a parking spot in front of the house, but he had to reverse slightly to fit into the tight space between the two cars. He turned off the engine, pulled the key out of the ignition, grabbed his cell from the car seat, but did not get out of the car right away. Dreamily he stared at the gate of the house, which was just at eye-level, and for a moment he had the feeling that he was standing in front of him, on the middle step. He smiled at his own triviality; little did he know yet the existential role that step would come to play in his life. He got out of his car and first went to the downstairs apartment, without any apparent goal. Once he was inside, he decided to take the dirty sheets upstairs. He mechanically pulled off the duvet covers and pillowcases. He wrapped them all in a single sheet and was about to leave when he noticed a handwritten note on the table. He recognized that it was Josef’s handwriting from the letters, which were always hastily scrawled onto the paper rather than written with care. He put down the bundle and picked up the paper. Based on the first few lines, he did not expect the letter would eventually address someone personally. After the letter, which covered about two-thirds of the page, Josef had written a coda: „If you have time and energy, finish it. I have to go.“  ===> read more…